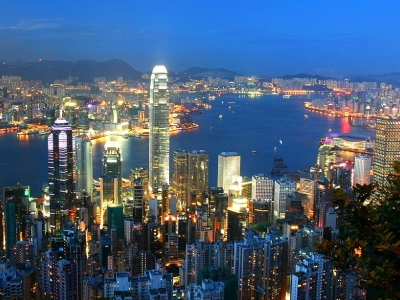 The Hong Kong Special Administrative Region of the People's Republic of China, is a territory on the southern coast of China at the South China Sea. It is is an autonomous region with its own government. It is one of the leading economic and financial centers of the world and one of the primary banking centers of Asia. The population is 7,200,000, making it one of the world’s most densely populated areas.

It has been stated by archaeologists that there is evidence of human presence in the area that is now Hong Kong from 35,000 to 39,000 years ago. The first emperor of China conquered the Baiyue tribes in Jiaozhi In 214 BC, and annexed the territory into imperial China. Under the Tang dynasty, the Guangdong (Canton) region flourished as a regional trading and financial centre. Jorge Álvares, a Portuguese explorer, was the earliest known European visitor, who arrived in 1513. In the mid-16th century, a closed-door policy was enforced and it strictly forbade all maritime activities in order to prevent contact from foreigners by sea. The refusal of Qing authorities to support opium imports in 1839 caused the outbreak of the First Opium War. The British Empire and the Qing Empire fought relentlessly and Qing's subsequent defeat resulted in the occupation of Hong Kong Island by British forces on 20 January 1841. In 1842, the Treaty of Nanking was signed and the name, Hong Kong, was first recorded on official documents to encompass the entirety of the island. At the time, the population of Hong Kong Island was 7,450. The Japanese occupied Hong Kong briefly during the second world war. On 1 July 1997, the transfer of sovereignty of Hong Kong from the United Kingdom to the People's Republic of China took place, officially marking the end of Hong Kong's 156 years under British colonial governance.

As of 2015, Hong Kong has 159 licensed banks, 21 restricted licence banks and 23 deposit-taking companies, constituting a total of 203 authorized institutions with 1,372 local branches. There are also 63 local representative offices of foreign banks in Hong Kong.

The Hong Kong Monetary Authority and the Hong Kong Securities and Futures Commission are the financial services regulators of Hong Kong, along with the Bank of China. Various departments of the BOC and the Monetary Authority are responsible for regulatory oversight of the banking industry in Hong Kong, with the Hong Kong Securities and Futures Commission being responsible for regulating the financial markets. These departments hold various regulatory mandates to oversee the activities of domestic banks, foreign banks as well as financial services firms and other financial institutions.

Hong Kong is ranked at 3rd position on the 2014 Financial Secrecy Index, which places it at the very top end of the secrecy scale. Hong Kong accounts for over 4 per cent of the global market for offshore financial services, making it a large player. As per the Financial Secrecy Index, Hong Kong is one of the world’s fastest growing secrecy jurisdictions today. The financial secrecy index quotes, that “Hong Kong built itself up over the decades on a spirit of extreme laissez-faire and anti-tax, and even anti-government attitudes and some called it the freest economy in the world”.

Hong Kong is a member of the Society for Worldwide Interbank Financial Telecommunication (SWIFT). The SWIFT network is the safest and most secure system for financial transactions worldwide.

SFM has a relationship with an extensive network of private and major banks in Hong Kong. All of the banks we refer our customers to offer a full international banking platform, with multi-currency accounts (£, € & $) as well with online banking and debit/credit cards. Please note that your physical presence will be required for the account opening procedure.